For the last few weeks, working with children at the New Generation primary school in Abu Dis has both been interesting and so much fun!


I have a fruitful time with my year 6 class who enjoy drama and English. They're acting skills most definitely surpass mine! They always have the ability to make me laugh, mixing their stories and acting with comedy. Teaching the children games that I played at school when I was younger has taken me back to those years, and is probably one of the reasons why I always (despite my age) join in and (unashamedly) compete against even my Year 5's.


The children are very creative, often adding their own twist to the games. Playing ''What's the time Mr Wolf?'' is never going to be the same again.. 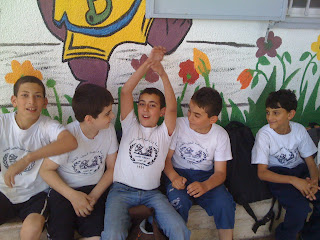 He decided to go solo, whilst his teammates look on.. 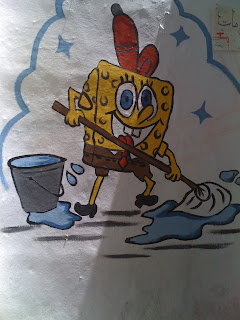 The walls of the school are covered with the alphabet and numbers, from French
to English to Spanish, and cartoons. This one makes me happy..